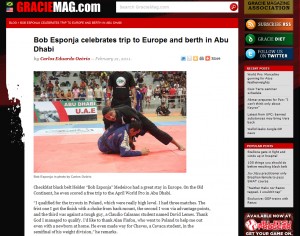 CheckMat black belt Helder “Bob Esponja” Medeiros had a great stay in Europe. On the Old Continent, he even scored a free trip to the April World Pro in Abu Dhabi.

“I qualified for the tryouts in Poland, which were really high level. I had three matches. The frist one I got the finish with a choke from back mount, the second I won via advantage points, and the third was against a tough guy, a Claudio Calasans student named David Lemes. Thank God I managed to qualify. I’d like to thank Alan Finfou, who went to Poland to help me out even with a newborn at home. He even made way for Chaves, a Cavaca student, in the semifinal of his weight division,” he remarks.

But the trip to Europe, alongside wife and black belt Marina Ribeiro, wasn’t left at that.

“Marina and I had a great 45-day training camp at the academy of Shimon Mochizuki, Alexander Trans’s teacher, and we had great results. Marina won the European Open in a stacked division; Trans won his weight group and the absolute at brown belt, getting the tapout in all his matches; and Shimon managed his first medal at black belt, in the absolute master division. Back in the female division, we put four girls on the winners’ stand!” he celebrates.

“Then we went to Sweden and stayed at the house of Hasse and Margareta Myhr, Finfou’s adoptive parents and those responsible for Fight Zone Stockholm. Hasse is a genius when it comes to positions and strategy! We went at the invitation of Finfou and Bruno Mathias (who also lives there) to train for the Polish qualifiers, and in the end everything came out alright,” he adds.

Now Bob is focused on his next challenges.

“The best thing you can do in a division like the lightweight one is to train as much as possible and not expect anything. There are only big names of the sport there and I want to be at those guys’ level. Finfou will head to João Pessoa for us to train at a big training camp in Paraiba. We’ll train for the World Pro, Brazilian Nationals and Worlds. Antonio Carlos “Cara de Sapato”, Marina Ribeiro, Bruno Mathias, Alexander Trans, Felipe Baixinho, Rulio Areda, and Jiddu Bastos and others will all be there. I invited our masters Léo and Ricardinho Vieira to take charge of everything,” he says in closing.